Transbiaga has started the installation of a new wind farm in Chile. Puelche Sur project, located in the communes of Frutillar and Puerto Octay, in Los Lagos Region, will have 33 turbines model N149-4.8 erected on a 145m high steel tower, from Nordex Energy. For this purpose, Transbiaga will have an LR1600/2W and an LG1750 from its own fleet as main cranes, in addition to all its installation team in order to be able to complete the assembly of a new project before the deadlines.

This project will have an estimated capacity of 153 MW, equivalent to the consumption of at least 180 thousand homes per year.

In addition, another crane LG 1750 is also operating.

Transbiaga is perfectly familiar with the operation of the crane LG 1750 lattice boom mobile crane model, as they already have five other units in their machinery pool. In addition to operational needs, we decided to go for this crane model because of its high lifting capacity and mobility, factors that meet the needs and requirements of a wind farm. Likewise, with the new acquisition, equipped with the SX jib system and which is designed for the assembly of heavy equipment on high wind towers, we will be able to meet our work expectations. On the other hand, it also has the SX configuration, thanks to which we will be able to meet the demands of the wind turbines of the future. For all these reasons, we requested that it be configured for the maximum height of 165 meters of main boom and with F jib.

Transbiaga's three crane LG 1750 units perfectly complement the rest of its machinery, since we use them as main cranes for the assembly of wind farms, making them indispensable for carrying out this type of project in the most efficient way and with the highest possible quality. They are appropriate equipment when carrying out this type of operation, since being a self-propelled mobile crane allows us to move between platforms, occupying a smaller width than a crawler crane. In addition, as it has a high load capacity and great height, it allows us to lift wind turbine components in a safe and reliable way, as well as effectively. Transbiaga's work focuses mainly on Latin America and northern Europe, especially in the assembly of wind farms. In order to carry out this type of project, they also have eight Liebherr LR 1600/2W narrow-gauge crawler cranes. 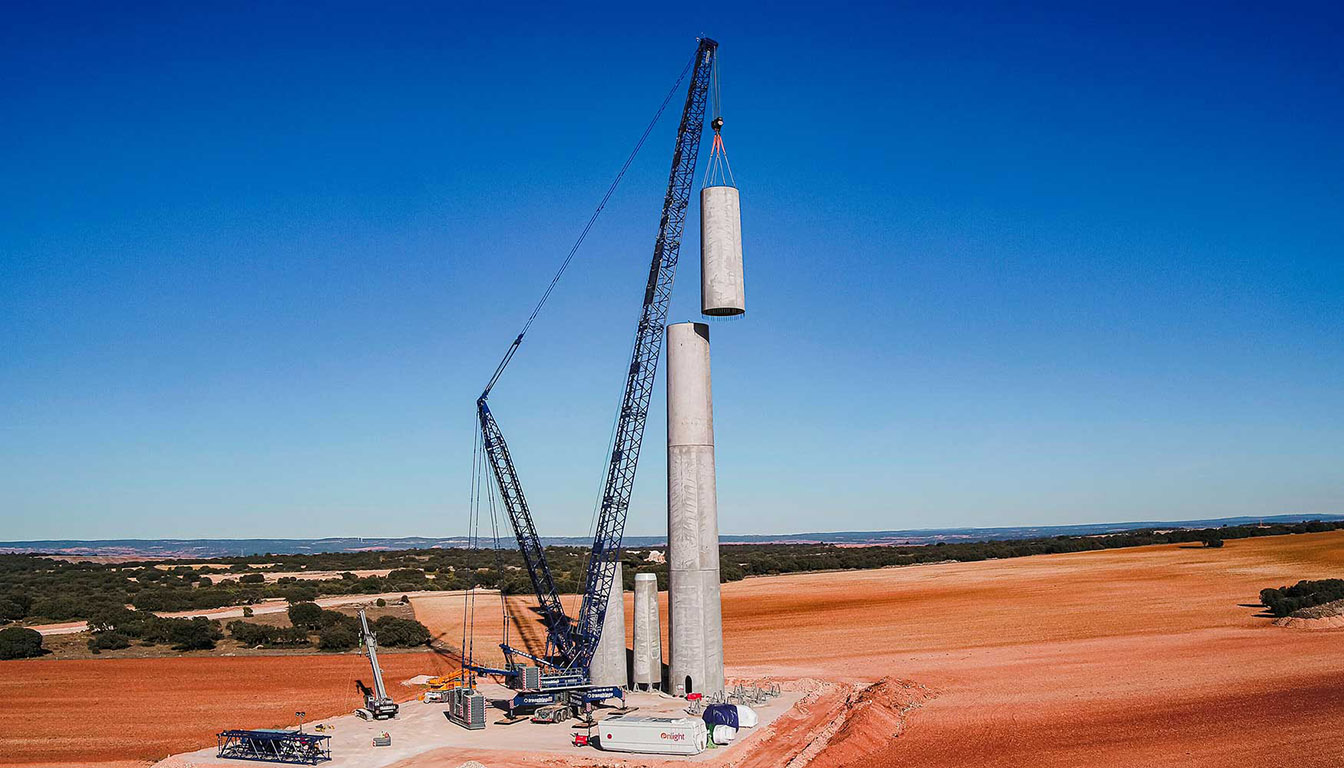 Assembly of the concrete tower sections, weighing up to 255 tons, the nacelle and generator, model DELTA4000 from Nordex weighing 140 tons, and the wind blades weighing 21 tons and 74 meters long.

This is the largest wind farm built in a single phase in Spain. Located in the province of Cuenca, will cover an area of 41 km2 and will have a road network of nearly 80 kilometers in length. In terms of energy, the Gecama wind farm will offer an installed capacity of more than 300 megawatts, generating around 1,000 gigawatts per year and saving 160,000 tons of CO2 emissions.

For Transbiaga, working on the assembly of the Gecama wind farm entails that "we are proud that clients as renowned as Nordex trust us to carry out this type of wind projects, which means that we are one of the references in the sector worldwide, both for the capacity of our fleet and work teams, and for maintaining high safety and quality standards. The construction of this wind farm is part of a series of projects that Transbiaga has been carrying out in Spain for Nordex, one of its largest clients, for many years. In addition, they have other active projects in Sweden, Chile, Mexico and Puerto Rico, with plans to expand to other countries in 2022.

Transbiaga has a fleet of machinery consisting of 49 cranes, 43 of which are Liebherr telescopic mobile cranes and crawler cranes with lattice boom, 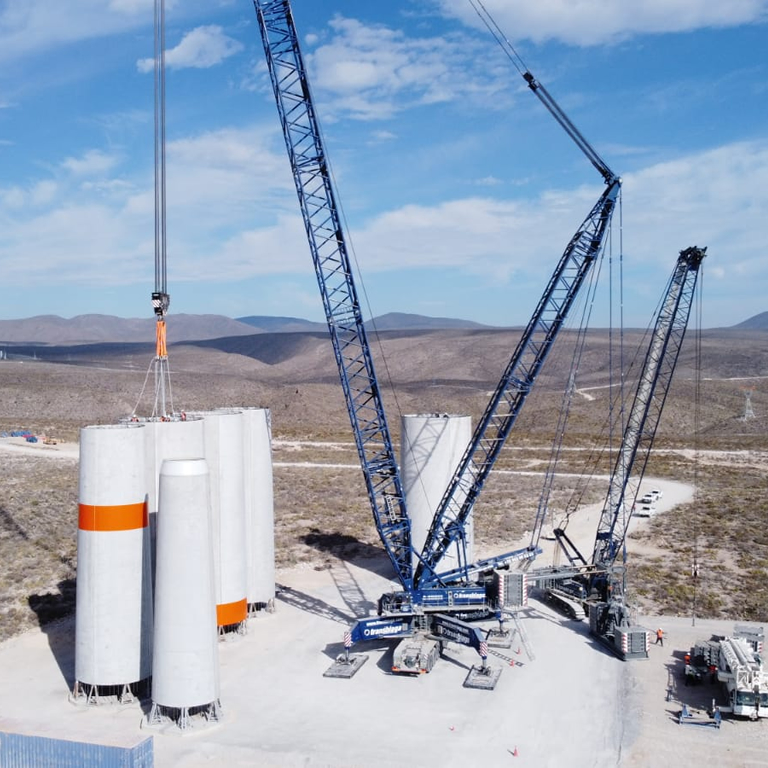 Recently TRANSBIAGA has started the construction of a new wind farm in Mexico, which will be one of the last wind energy construction projects in the country before the stoppage in the installation of these renewable energies planned by the Mexican Government for the next years.

The project, located in the Ejido Hipólito, in the municipality of General Cepeda, Coahuila, will consist of 20 turbines of the new N155 of Nordex, at 120 meters high Concrete Towers.

It will have a maximum installed capacity of 96MW and will be able to supply the equivalent of 150,000 homes per year. 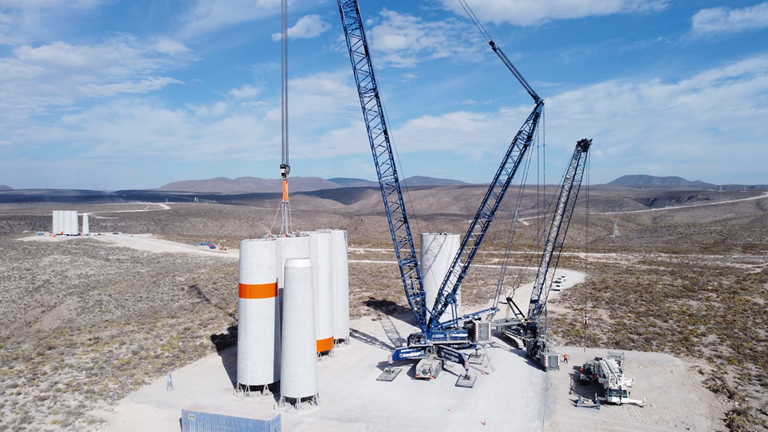 TRANSBIAGA has recently started the construction of its first wind farm in northern Europe, specifically in the location of Lillhärdal in Sweden. Åndberg project consists of 53 Nordex Delta4000 turbines, assembled on a 105m high steel tower, with more than 5MW power each. The project will have a total capacity of 286MW, and will become one of the largest wind energy projects in the country, producing more than 800GWh annually.

Åndberg is TRANSBIAGA's first project in northern Europe, and begins a new stage of expansion of the company with several projects in Northern Europe in the upcoming years.
TRANSBIAGA has been selected for the installation with cranes of this project, and provides for this 2 of its LR1600/2W cranes of Liebherr. It also incorporates part of its own truck fleet to support the transfers of cranes between positions, and with which it has just finished the road and  transport of all the components of the cranes from their previous location in the south of Spain, which has been a very important logistical challenge. 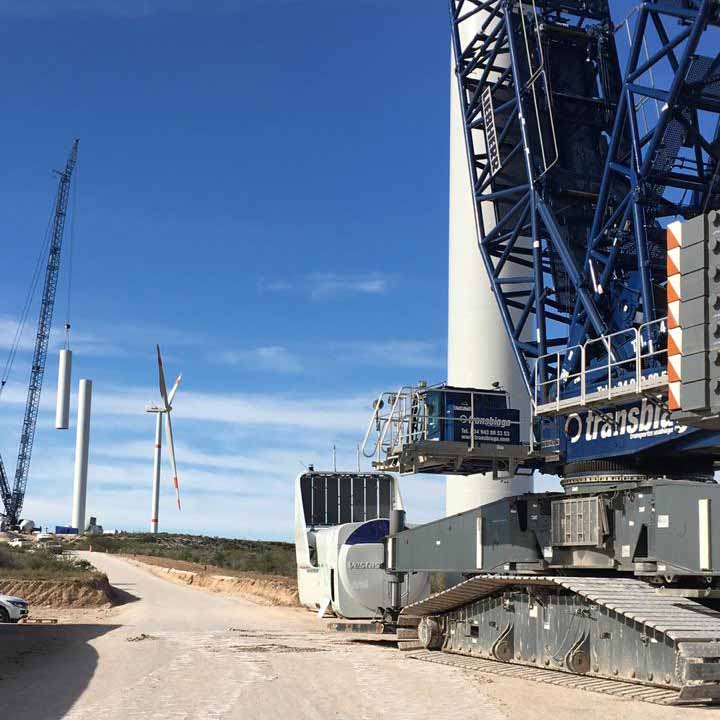 Transbiaga begins the construction of Sierra Juárez II Wind Farm. Transbiaga has been selected by Vestas for their 108MW project, which will be built in the city of Tecate, Baja California (Mexico).

The project consists of 26 wind turbines latest model V150 – 4.2MW of 105m hub height. Vestas has contracted Transbiaga’s LTR11200 crane, due to its great versatility and efficiency in a very mountainous terrain and valid for 5m wide roads.

Vestas has relied on Transbiaga for the installation of its latest generation V150 turbines, with 73.7m long blades. Transbiaga will execute in this project the erection with cranes and commissioning of the turbines with the assembly equipment. 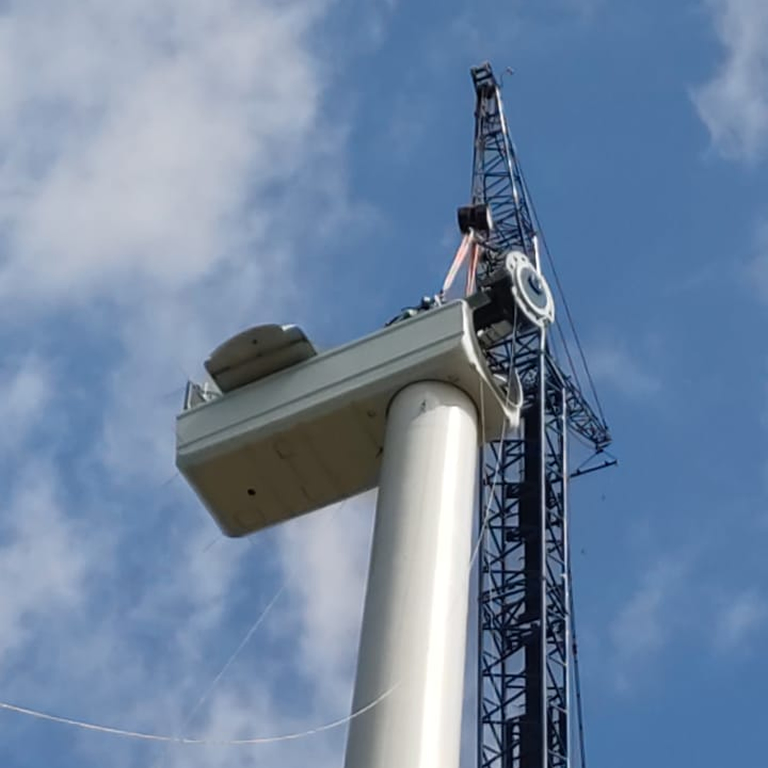 Transbiaga has installed the first Delta4000 turbine from Nordex. The installation has occurred at the project of Alena, near the city of Los Angeles in Chile. For this proposal, Transbiaga has used their own’s LR1600/2W Liebherr crane, and with their own installation crew, they have erected the N149-4.5MW turbine at 145m steel tower. Transbiaga proves to be at the forefront of new technologies and next-generation turbines.

With the N149/4.0–4.5, the Nordex Group was the first company to launch a turbine platform with a flexible rating as part of its core design philosophy and operation strategy. This design approach, combined with a variety of operating modes, enables the Delta4000 turbine to adapt to the grid operator’s individual requirements, local wind conditions and noise constraints.

This also means it’s possible to optimize the overall yield of a wind farm by means of the different maximum output of individual turbines, thus always exploiting the full potential of each turbine position within each single wind farm.

Like its predecessor generation, the turbines of the Delta4000 series meet the grid requirements of international markets, in addition to providing grid stabilizing system services. The technical concept of the Delta4000 series minimizes service requirements over the entire service life of the turbine. Each component was rigorously designed to ensure lower maintenance effort, in addition to a mobile crane solution, which the models of this product series provide.